Rubik's Cube: Is a 3D Puzzle a Good Idea? 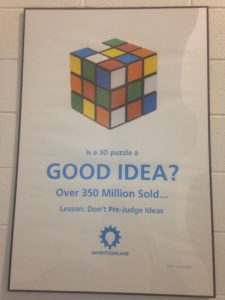 The Rubik’s Cube is a familiar and beloved three-dimensional combination puzzle game. Invented in 1974 by architecture professor Erno Rubik, and reaching peak popularity in the 1980s, it remains the top-selling puzzle game in the world. The original game has evolved into many theme and color variations, but the classic features six faces of a cube, made of up nine colored stickers, that can be rotated independently by a pivot mechanism. Turning an individual face remixes the colors of a face, creating the premise of the puzzle. The player must solve the puzzle by making a series of adjustments to return the cube to its original state: six solid-color faces.

Rubik developed the puzzle in order to solve conceptual problems in his architecture studies. Understanding the movement of individual components in relation to the composite integrity of a structure led to the prototyping of the cube. Rubik only realized the potential of the model as a puzzle when he attempted to restore his cube to its original state.

Today, mathematicians, competitive puzzle solvers, and theorists across multiple disciplines continue to use the Rubik’s cube as a conceptual teaching tool, and game-lovers across the globe enjoy this unique and stimulating toy. Imagine if Rubik had doubted his learning process and kept his model to himself—another example of the importance of trusting your ideas, following your logic wherever it takes you, and adopting a “hands-on” approach to development. You never know what problems you may solve, or, in Rubik’s case, create!